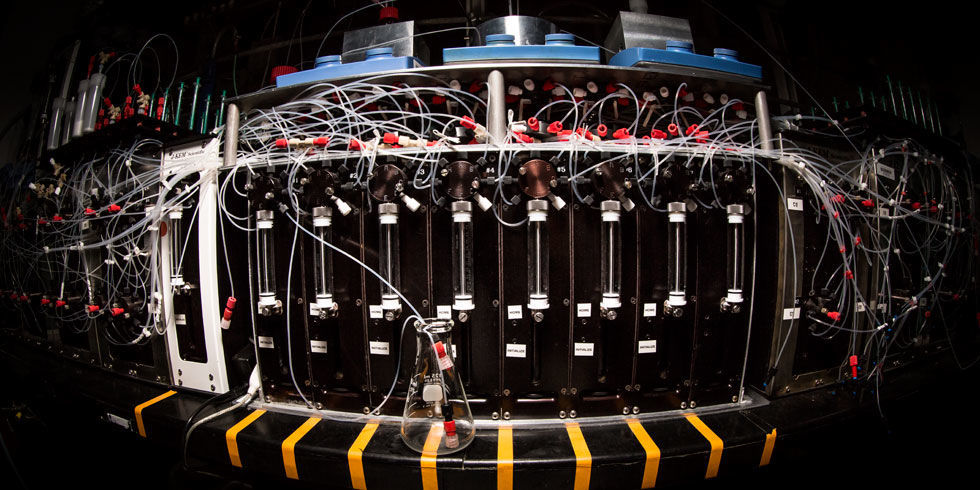 Need an obscure medicinal compound found only in a jungle plant? Just print it

Say you're a medical researcher interested in a rare chemical produced in the roots of a little-known Peruvian flower. It's called ratanhine, and it's valuable because it has some fascinating anti-fungal properties that might make for great medicines. Getting your hands on the rare plant is hard, and no chemical supplier is or has ever sold it. But maybe, thanks to the work of University of Illinois chemist Martin Burke, you could print it right in the lab.


In a new study published in the journal Science today, Burke has announced the specs of a chemistry's own version of the 3D printer—a machine that can systematically synthesize thousands of differentmolecules (including the ratanhine molecular family) from a handful of starting chemicals. Such a machine could not only make ratanhine step-by-step, but also could custom-create a dozen other closely-related chemicals—some never even synthesized before by humans. That could allow scientists to test the medicinal properties of a whole molecular family.There are many molecules in nature with some extraordinary natural properties, that are incredibly hard to make and just aren't available to be purchased in a [lab supply] catalog," Burke says. "The general assumption has long been that you need a custom strategy to build each molecule, especially if you're trying to automate the process. But we've demonstrated you can use the same system to create radically different molecules. You just need to modulate a step-by-step process."

Burke's machine simplifies the complex process of synthesizing chemical into a series of generalizable steps. Whether you're trying to form a ring of carbon atoms or strip away hydrogen atoms, each step requires a dose of starting chemicals, which Burke separates into distinct building blocks. Think of them as simple groups of chemical compounds like O2 or CO2 that snap together.
To perform each step, the machine connects a building block and then induces a chemical reaction and washes away the reaction's byproducts—slowly building each molecule from the ground up. The building blocks are snapped together like LEGOs, allowing the chemicals to mix and a reaction to take place.
Using this process, Burke showed that his machine could manufacture thousands of different chemicals in 14 distinct classes of small molecules, including known medicines to several molecules used in LEDs and solar cells. The amount of time each molecule's synthesis requires is a matter of hours, depending on how many steps are involved.
To answer the question of why such a cool technology is only now becoming available, Burke says the hard part was figuring out the new cleanup method that happens after each chemical reaction. (Some of the information is proprietary, but Burke says he and his colleagues found a universal way to isolate out the molecules they want to keep when washing away the byproducts.)Burke's prototype is currently limited in the number of chemicals it can produce. But he believes that it can already be put to use in developing new drugs. According to Burke, saying his machine can rapidly synthesize some molecules that otherwise would take a trained chemist years to craft."And down the line, like the 3D printer, I expect you could see this process in the hands of non-specialists and even consumers," Burke says. "Giving the general population the ability to synthesize these molecules would be [game-changing] in ways I can't even imagine."