Say Hello To Earth 2.0! Historic Kepler Discovery Suggests We Are Not Alone

Remember the name Kepler 452b. Because in our search to discover if we are alone in this vast and fascinating universe, a sole life-harboring world among countless dead and uninhabitable planets, we may finally have a true candidate for Earth 2.0.
For the first time, scientists have found what appears to be a rocky world orbiting a Sun-like star at almost exactly the same distance that Earth orbits our own Sun. While other potential habitable planets have been found before, this is the first that could plausibly be another Earth. This might be the real deal, people.
Kepler 452b, found by NASA’s Kepler Space Telescope, is located 1,400 light-years from us. It orbits a star that is 4% more massive and 10% brighter than our Sun. The planet itself is 1.6 times the size of Earth – making it a super-Earth – but the scientists are fairly sure that it is a rocky world, owing to its size and the type of star it orbits.


Its orbit, 384.84 Earth days and 5% more distant than our planet is from the Sun, places it right in its star’s habitable zone, where it is not too hot or cold for liquid water to form: the same region Earth is in around the Sun. This is not the first Earth-sized planet found in a habitable zone; last year, the world was abuzz with the discovery of Kepler 186f, more similar in size to Earth. But that planet orbited a red dwarf star, smaller and cooler than the Sun. Kepler 452b, excitingly, orbits almost an exact clone of the Sun.
“Sun-like stars are people’s favorites, because we know of one circumstance [Earth] where that paid off [for life],” Seth Shostak, the Director of SETI (Search for Extraterrestrial Life), which was involved in the planet discovery, told IFLScience.
Shostak revealed to IFLScience that, such was the potential habitability of this world, SETI was already studying it to find out if there were any signs of life coming from it, albeit so far to no avail. “We have actually started looking at this with the Allen Telescope Array to check it for obvious signals of artificial origin,” he said. “We haven’t looked over all the frequencies yet, but if there are any aliens on Kepler 452b they are being very coy.” Shown is an artist's impression of Earth compared to Kepler 452b. NASA/JPL-Caltech/T. Pyle.
Although the mass of the planet can’t be directly determined yet, the scientists think it may be about five times that of Earth based on models. A rocky planet of this size and mass would likely still have active volcanism on the surface.
However, it should be noted that the star it orbits is 1.5 billion years older than our Sun. On the one hand, this increased energy from its star means that any oceans on its surface are likely being evaporated, lowering its chance of being habitable. On the other hand, this planet offers a fascinating opportunity to see what might become of Earth in the future.
“If Kepler 452b is indeed a rocky planet, its location vis-a-vis its star could mean that it is just entering a runaway greenhouse phase of its climate history,” Doug Caldwell, a SETI Institute scientist working on the Kepler mission, said in a statement. “Kepler 452b could be experiencing now what the Earth will undergo more than a billion years from now, as the Sun ages and grows brighter.” 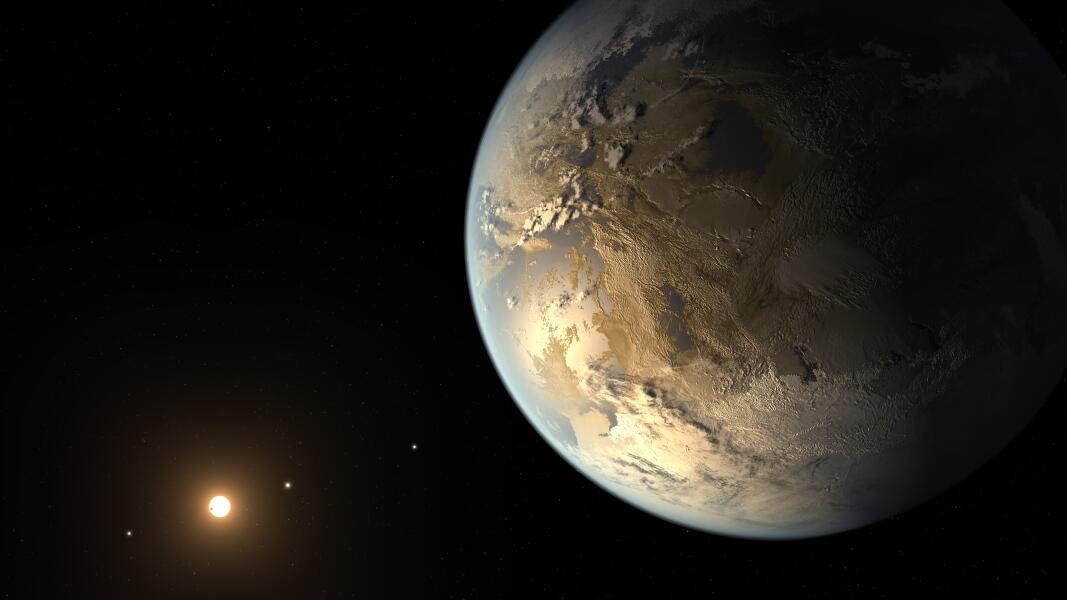 This new planet joins others such as Kepler 186f, illustrated, as potentially Earth-like worlds. NASA Ames/SETI/JPL-Caltech.
Kepler 452b was found in a new catalog of 500 exoplanet candidates from four years of Kepler data. 12 of these are less than twice Earth's diameter and orbiting in their star’s habitable zone, but Kepler 452b was the first to be confirmed as a planet. It could therefore be just one of many Earth 2.0s that are on the cusp of being announced.
"Kepler 452b takes us one step closer to understanding how many habitable planets are out there,” said Joseph Twicken, also of the SETI Institute and the lead scientific programmer for the Kepler mission, in a statement.
While Kepler 452b ticks almost all of the boxes for being an Earth twin, there is one that it doesn’t – its size, which is 60% greater than Earth. Thus, while NASA is heralding it as the best candidate for Earth 2.0 so far, the hunt will go on for even more Earth-like planets. NASA's Kepler telescope, artist's impression shown, was launched in 2009. NASA/Ames/JPL-Caltech.
Actually finding life on these planets is more difficult. Although upcoming telescopes like theJames Webb Space Telescope (JWST) will be designed to study the atmospheres of exoplanets and search for signs of habitability, the range for doing this will be just tens of light-years from Earth, said Shostak. Kepler 452b, at 1,400 light-years away, is too far to be comprehensively studied at the moment.
But one thing is for sure – the chances of us being alone in this universe are looking increasingly slim. Whether it’s Kepler 452b or Kepler 186f or some other undiscovered planet, somewhere out there, there must be a world with life waiting for us to find it.
"Kepler 452b is one small step in answering the question [of are we alone] today," said John Grunsfeld, associate administrator of NASA’s Science Mission Directorate, in a press conference.