In neuroscience, neurons get all the glory. Or rather, they used to. Researchers are beginning to discover the importance of something outside the neurons—a structure called the perineuronal net. This net might reveal how memories are stored and how various diseases ravage the brain.
The realization of important roles for structures outside neurons serves as a reminder that the brain is a lot more complicated than we thought. Or, it’s exactly as complicated as neuroscientists thought it was 130 years ago.
In 1882, Italian physician and scientist Camillo Golgi described a structure that enveloped cells in the brain in a thin layer. He later named it the pericellular net. His word choice was deliberate; he carefully avoided the word “neuron” since he was engaged in a battle with another neuroscience luminary, Santiago Ramón y Cajal, over whether the nervous system was a continuous meshwork of cells that were fused together—Golgi’s take—or a collection of discrete cells, called neurons—Ramón y Cajal’s view. 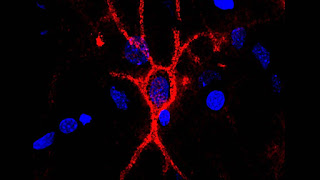 Ramón y Cajal wasn’t having it. He argued Golgi was wrong about the existence of such a net, blaming the findings on Golgi’s eponymous staining technique, which, incidentally, is still used today.
Ramón y Cajal’s influence was enough to shut down the debate. While some Golgi supporters labored in vain to prove the nets existed, their findings never took hold. Instead, over the next century, neuroscientists focused exclusively on neurons, the discrete cells of the nervous system that relay information between one another, giving rise to movements, perceptions, and emotions. (The two adversaries would begrudgingly share a Nobel Prize in 1906 for their work describing the nervous system.)

But it seems the focus on neurons has ignored crucial elements; neurons can’t explain everything about how the brain works, like how memories are stored or how various diseases ravage the brain. Now, neuroscientists are discovering that perineuronal nets may hold the secrets to some of the greatest mysteries of neuroscience.

One thing perineronal nets might unlock are the workings of our memories. “Up to this point, we still don’t understand how we maintain memories in our brains for up to our entire lifetimes,” says Sakina Palida, a graduate student in Roger Tsien’s lab at the University of California, San Diego.
Our current understanding is that memories are formed when the synapses—the spaces between two neurons—in our brain are reconfigured. As we learn, new synapses—new connections between neurons—are forged. If those connections are reinforced, proteins within the neurons are activated to boost the signal at that particular synapse, and what we’ve learned becomes committed to memory.

But existing theories have a few loose ends. For one, the proteins responsible are replaced too quickly, on a scale of days to weeks. It’s difficult to imagine long-term memories being stored in such a system.
To Tsien, a modern Nobel laureate, the breakthrough came when he started thinking outside the neuron. Instead of molecules inside neurons retaining memories, molecules outside neurons might be the key. “You need very long lasting molecules to store things and what else is better than just on the other side, the outside of the synapse?” Tsien says. “You have equal access to the information that’s in the synapse, but the proteins and carbohydrates that are on the outside of the synapse can last forever.”
Which brings us back, 130 years after it was first proposed, to the perineuronal net.
The perineuronal net is an organized tangle of proteins that helps form the extracellular matrix, a sort of neuron exoskeleton. As our brain matures, from before birth through the teenage years, connections between neurons are refined; unnecessary connections wither away while other, more vital circuits are strengthened. The perineuronal net is the finishing touch: it surrounds neurons, establishing a physical barrier to prevent aberrant connections from forming while leaving holes in the armor to let existing synapses through.
Tsien thinks that the structure of the net might be what’s holding our long-term memories. A hole in the net represents a memory: a stable, reinforced connection between two neurons. That the perineuronal net is involved in some form of memory isn’t entirely new; Tsien’s hypothesis is that it is the structure for long-term memory, and that is new.
But first, Tsien and his collaborators had to prove that the nets are long lasting. To test this, Varda Levram-Ellisman, a scientist in Tsien’s lab, gave baby mice food containing nitrogen-15, a rare isotope, some of which would be incorporated into the animal’s developing brain structures. When the mice were six weeks old, after their perineuronal nets were fully developed, they were switched back to normal food. If the nitrogen-15 was still present months later, it would mean those structures had lasted that long. Indeed, nitrogen-15 was still a part of the perineuronal net after 180 days (the equivalent of years in human terms).

The next step in developing the hypothesis was showing that the nets—and the holes within them—hold lasting memories. Palida likens making holes in the net to carving into stone. “Stone is a stable substrate. You retain the information regardless of what comes and goes over it as long as the substrate remains stable,” she says. Making new synapses requires certain enzymes to chisel through the net. When Levram-Ellisman gave mice a drug that inhibited one of these chiseling enzymes, the mice had poor long-term memory. Their short-term memory remained intact, however, suggesting drilling holes in the net was specific to long-lasting memories. In another experiment, Palida found that she could erode the nets in particular areas of the brain when she introduced a protein known to enhance memory.
Palida has also developed new ways to visualize the nets, enabling her to detect them even when their composition varies. With these tools, she has discredited the thinking that the nets were specific to certain brain regions or cell types. “These nets are widespread throughout the brain. They surround all neurons,” she says.
In 2009, perineuronal nets were blamed for the fact that fear memories are nearly impossible to erase in adults. In animal studies, fear memories are created by pairing a noise with a foot shock; mice learn to fear the noise since it means an impending jolt. In young mice, these memories can be completely wiped away by playing the noise over and over again without the foot shock; the mice relearn the noise is innocuous. But adult mice never really forget. Their memories can only be temporarily masked, they still crop up in triggering situations, like when put back in the cage that originally shocked them.
The maturation of the perineuronal nets marks this transition between child and adult; when adult mice were given a drug that degraded the nets, they were able to completely forget their fear, in the same way young mice do. Understanding this process could help explain post-traumatic stress disorder—in which horrifying memories seem etched in stone—and provide a new target for treatment; perhaps degrading the nets could help release some of the unrelenting memories.

The prevalence of perineuronal nets suggests that they could be the driving force behind not just long-term memories, but also certain neurological diseases. Sabina Berretta, an associate professor of psychiatry at Harvard Medical School, found that perineuronal nets are decreased in certain brain areas in schizophrenia. Additionally, several genes that have been implicated in schizophrenia code for molecules that make up the net or the enzymes that regulate it. Berretta found evidence that the nets are disrupted in bipolar disorder, too.
There have been striking results in studies of Alzheimer’s disease, as well; postmortem studies of patients show fewer nets compared to controls. “Once we understand what may be the factors that contribute to these changes, then it may be possible to start understanding how to address them from a therapeutic point of view,” Berretta says.
Perhaps paradoxically, given their role in long-term memory, recent work by Harry Pantazopoulos, a researcher in Berretta’s lab, has suggested that the nets might change over the course of the day. Although the total number of nets remains stable, in both mice and postmortem human brain tissue, the molecules within the nets seem to fluctuate in a rhythmic way; some of the nets’ components are increased during the day in certain brain regions, while others are increased at night. Berretta warns that the data is preliminary, but it suggests that these stable structures are also somehow dynamic. It may be that the composition changes to accommodate learning while we are awake and consolidation of memories while we are asleep.

At the latest Society for Neuroscience meeting in Chicago, it was clear perineuronal nets are not being ignored any longer. “They’re everywhere at this meeting,” says Angela O’Connor, a researcher at the University of Michigan who studies how the nets change when mice are put in stimulating environments.
Since they were overlooked for so long, perineuronal nets and the extracellular matrix might explain many of neuroscience’s mysteries, from how memories are stored for decades to how certain diseases disrupt the brain. Berretta suspects that there are other, similarly critical components of the extracellular matrix that have been ignored for too long as well. “It is possible from a pathological point of view that we haven’t even begun to understand the extent of these changes not only in schizophrenia, but also their involvement in other brain disorders,” Berretta says.
“The nets were reported a long time ago by Camillo Golgi. They were drawn, they were described. We simply didn’t know what to do with them, so we kind of ignored them,” she says with a laugh. Those days appear to be over.